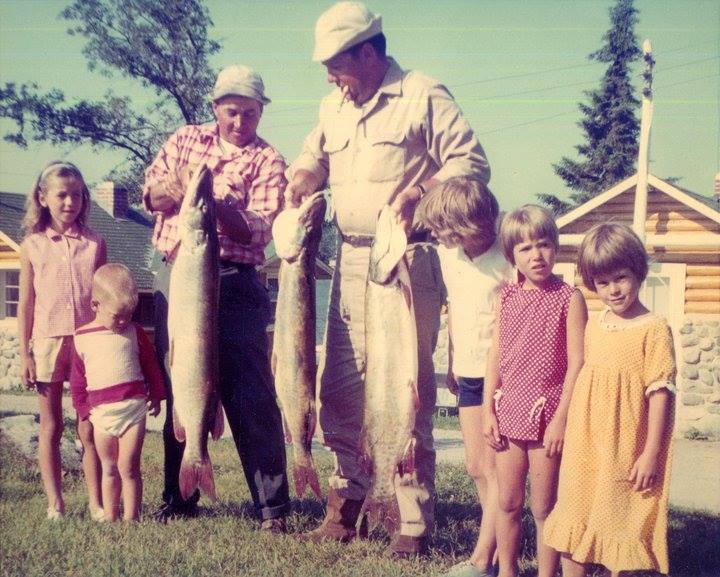 Every July my family went to the same place for vacation. And we drove there. In a motorhome. Five kids and our parents. I grew up dreaming of seeing the world. Instead, every summer I got Canada.

My parents had five children within eight years and the only affordable way for our family to travel together was to drive. It was the seven of us in a 32-foot motorhome with less than 200 square feet of living space. The motorhome had a kitchen with a small refrigerator and stove, and a tiny bathroom with a shower that we all shared. Three bunk beds dropped from the ceilings to sleep the smaller children. We each got a small drawer in the motorhome for all our clothes for the entire trip. I was the fourth of five children so I had one of the smallest spaces (I do think it’s why today I can travel the world with only carry-on luggage).

In the weeks leading up to our trip, we would keep out of my Dad’s way because he was stressed about leaving for vacation. After working all day, my dad was a man who found peace getting on his riding lawn mower and cutting the grass on our 2 1/2 acre yard. He cut the grass more often than needed. I think it was his way of seeing a therapist.

On the day of departure, Mom waved the five kids onto the motorhome while dad hooked a fishing boat to the trailer hitch. We sat quietly as he finally stepped through the door of the motorhome biting his lower lip, settled into the driver’s seat, took a right turn out of our driveway and drove north almost non-stop for sixteen hours to Lake Arrowhead, a fishing camp in Canada. I’m not too sure my mom even liked to fish. It was a family vacation, but really it was my dad’s trip.

The drive always began with the same Johnny Cash songs playing on repeat because Dad had control of the eight-track player near the driver’s seat. I covered my ears with a pillow. Lines about “burning rings of fire” were terrifying to a six-year-old going on vacation.

Dad liked to make the drive as quick as possible. He would only pull over to get gas or use the bathroom. When it was time for dad to relieve himself, we knew to get the hell out of the way once he pulled the motorhome over. We weren’t allowed out of the vehicle during these stops. Dad would use the bathroom inside the motorhome and get back on the road. One year, he experimented with a homemade urinal that he duct taped next to the driver’s seat so he wouldn’t have to stop to use the bathroom. I think he got the idea from the astronauts.

Dad pretty much ignored us while he drove. While mom and the five of us kids ate meals together, took naps and played cards, dad would talk to the truckers on the road with his CB radio. By the time we crossed the border to Canada, my father had stopped biting his lip. That’s when I moved to the front of the motorhome to sit next to him.

Canada was the one place I remember my Dad being happy. It was also the place I felt connected to my family. At home in Indiana, my two older sisters played with each other and my two brothers played together. But on our summer vacations, everything changed. My sisters would make nature poles with me from sticks we found in the woods. They showed me how to tie fishing line and a hook to the end of the stick and we would catch perch off the dock near our camping site. My brothers and I swam in the lake every day looking for minnows and leeches to collect in a pail. Some days we had no luck and waded out of the dark green water disappointed until we looked down to find leeches attached to our thin legs as blood drip down our sunburned skin. We were thrilled.

Most days Dad fished with a local fishing guide. Dad was fishing for muskies which were the equivalent of catching a great white shark if you’re fishing in Canada. Muskies can grow up to six feet long.

In family photos from those trips, my dad is always holding a fish that was bigger than me. Dad would be in the middle of the photo proudly holding the fish and the kids would be crowded around him, trying to fit into the picture.

By the time I was twelve, I stopped going on our family vacations because I was swimming competitively and my coach didn’t want me to miss a week of practice. Later my older siblings stayed home for their summer jobs, sometimes even Mom wasn’t able to make the trip. We got older and moved away from home, but every July my Dad still hooked up the boat to the motorhome and turned right out of the driveway, even if it meant driving alone.

The summer I was twenty-five, I ended up back in Canada on a small island in Lake Superior on a romantic holiday with my new boyfriend. We were definitely not fishing.

My Dad happened to be in Canada at the same time but was by himself, fishing his favorite spots, still looking for muskies. During the trip, I got a message that my Dad’s mother died unexpectedly. I knew what a loss this was for him. He had been caring for his mother since the age of fourteen. When his abusive father chose to drink instead of working, my dad dropped out of high school, took a full-time job and supported his mother for the next fifty years.

When his mother died, it was the one time a drive in his motorhome would not put my Dad at peace, so I left my boyfriend and met Dad at a small airport near the shores of Lake Superior and we flew back to Indiana together. It was the first time I had ever been on a plane with my father. As Lake Superior disappeared, we looked out the window of the plane to see the moon rising and I remembered a night in Canada during one of our summer vacations.

It was 1969 and Neil Armstrong was about to be the first man to walk on the moon. We had a black and white TV with a four-inch screen that was never used on vacations, but my parents brought it out to watch this historic moment. All seven of us gathered around the tiny screen. I was only six, so I didn’t understand the significance of what was happening. Just after Neil Armstrong took his first step, my father quietly stepped outside the motorhome into the darkness of the Canadian skies. I followed him. Together, we stood under the massive star-filled sky and gazed up at the moon. It was at that moment I understood the man on the TV screen was now walking on the same moon I was gazing at. I remember taking my dad’s hand and feeling connected to him and to the moon.

I reached across the seat of the airplane and put my hand on my dad’s hand. My dad never spoke about his feelings so neither did I, but I held his hand the whole flight home.

Three months later, my dad had a stroke and died. He was fifty-eight years old.

I still think about him when I look up at the moon. I remember his love of fishing gave me some of the best memories of summer vacations. I remember how happy I was to be standing in a photo next to my dad and a fish.